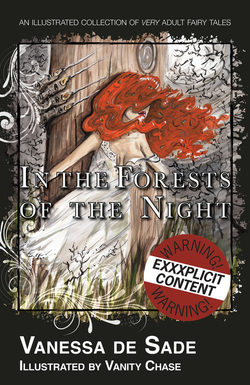 "In the Forests of the Night is a modern urban reimagining of some of those classic Grimm tales that so turned me on in my youth.  I haven't simply retold the originals to incorporate sex scenes, but, instead, I've written new urban fables that evoke all those dark woods and even darker deeds, transposing them to the cement jungles and weltering neons of my own city life..."
Vanessa de Sade

Each story blends the magic and fantasy of the traditional fable with the carnality and lust we’ve come to expect from Vanessa de Sade!

Beautiful, visceral and devoutly debauched, In the Forests of the Night explores a much more grown-up side of fantasy. The seven sexy stories within these pages offer up a mind-bending, pulse-quickening twist on a classic genre.

If you think you know how a fairy tale is supposed to end, this book will make you think again! Sexual and cerebral, magical and modern, In the Forests of the Night is the ultimate collection of sexy, adult fables!
Here's an excerpt:

He should have known about the coming storm, everybody else did, but Edward read no newspapers and listened to no radios, so his first inkling of the downpour was when thunder rumbled and the blazing August sky suddenly clouded and turned a sickly green and then yellow and eventually black like a ripe bruise and the rain began to fall.  Edward's crops were secure, well banked in and staked against the possibility of inclement weather, but the girl's were not, her greenery lying thick and abundant in the loose soil, ripe for the slaughter.

And the rain, when it came, was like a biblical torrent, great sheets of water thundering down from the heavens and washing away everything that stood in its path.  Edward had not even known that she was there until he saw her from inside his shed, the rain water slewing down the  window pane like a fishmonger's display, making her form undulate like a warped film as she ran through the wet trying to keep her crop from being uprooted and washed away by the waters of Noah.

He hadn't thought about what he was doing, but he found himself out in the unrelenting wet with her, the two of them working as one, staking down great sheets of black plastic that billowed like ghost ship sales in the storm as they hammered stakes into the splunging-wet soil to cover the crop which, he suddenly realised, was what would keep her family fed over the coming winter.  The girl worked like a field slave, her body a sinewy machine in the pouring rain, the faded dress soaked through and clinging to her, her only care the saving of her crop, and she did not rest until they had it secure, tucked in against the elements like a favourite child in its cot.

Outside the rain was still hammering on the asphalt roof of the shed and through the tiny window the world outside looked like a greenish aquarium, eerie in the storm light and everything undulating to the pulse of the tempest.  Inside, though, the little hut was still warm from the heat of the day, and Edward lit the hissing gas ring to boil a kettle and dry their clothes.

He worked soundlessly, methodically, not speaking, and was shocked when the girl broke the silence.

"Thank you," she said quietly, and her voice was soft and well-modulated, not the coarse accent of the tower blocks.   "Is there something I can do to repay you?"

Edward shook his head.  He had everything he wanted right he here.  He needed no more.

The girl shivered, her wet clothing clinging to her, her long chestnut hair, worn in a single braid, hanging sodden to her back.

"Come closer to the stove," Edward chided, "dry yourself off."

She did, and he suddenly became aware of her scent.  Cheap shampoo, wet clothing, supermarket deodorant.  Nothing extraordinary, but in the confines of the little shed with its comforting smells of resin and new wood, she was heady and potent.

The girl sighed and drew nearer, lifting her arms behind her head to undo the band that held her wet hair in it plait, and he saw that her limbs were silky and white and her armpits were covered with thick jungles of soft brown hair, slowly undulating like bracken in a spring breeze and awakening in him all the long buried desires that he thought his wife and the old paper-cut-out judge had burned out of him for ever.

He looked at the girl, fixing her long brown hair, saw the thick down in the white of her armpits and visualised her cunt, and the girl, seeing him and seeing what he was seeing, read his mind and smiled.  "So there is something," she said quietly, and Edward Edwards nodded.

There was only one chair in the shed, a steel frame and gaudy canvas folding deckchair, and she pushed him into it and unzipped him, taking his cock out with great and meticulous care, like an antique dealer carefully unwrapping the tissue paper from an intricately carved ivory tusk.  He was already huge, his member like an engorged monolith, the red and purple head already inflamed beyond the confines of his foreskin and poking out insistently.

She smiled and took him gently in her hand and pulled the soft chamois leather skin first up and then down, exposing the full proud head of his uncircumcised cock and marvelling at its size and scent, noting how the gaping snake's eye hole was already weeping clear come, and slipping her hand below his clothing to feel his warmth and run her fingers thorough his thick pubic hair.

"You thought about my cunt, didn't you," she said, running her fingers up and down his veiny shaft, "you visualised me naked and this is what grew up from your dirty thoughts."

"And now there's something you need after all, isn't there?"

"Then ask for it," she whispered.

Edward Edwards blushed scarlet but found his voice nevertheless.  "Show me," was all he said.